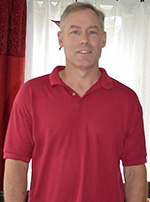 Calvin Boal was raised in upstate New York and currently lives in the Cobleskill, New York, area. He worked for over twenty-seven years in law enforcement.

He has shown a great interest in history, particularly in American history and the French and Indian War and the American Revolution. He has written two books as a result of his interest in the Colonial period. Last Run of the Whisperer was written after extensive genealogical work on his family history, and is an historical/fiction story about a soldier in the American Revolution. St. George's Cross and the Siege of Fort Pitt is an historical/fiction story about a young man who becomes involved in the French and Indian War/Pontiac's Rebellion and was written after living in western Pennsylvania for a number of years, near the Forbes Road.