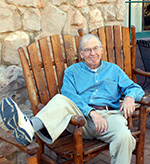 Five generations of the Beahan family have been in the Adirondacks, one way or another. In 1902, three Beahan brothers, Tom, John and Barty, Tom's wife, Minnie, and John's wife, Liva, began the epic with a logging job near Star Lake on the Little River. Children from the camp worked some in the woods and returned to hunt and fish.

Larry Beahan, a grandson, grew up a city kid in Buffalo. On trips to visit his Gramma and Grampa in Carthage at the edge of the Adirondacks, he tasted the flavor of the woods but didn't catch the significance of it until his forties. Kerosene lamps, double-bitted axes, two-man-crosscut saws, grindstone, wooden vice for carving axe handles, the wood cookstove and water from a pump were just the way things were at Gramma's.

Then he began exploring the Adirondacks, climbing mountains, skiing, canoeing, camping and digging into family lore. He, his sons and grandchildren have explored the site of the family lumber camp, where Larry's dad was born, nearby Five Ponds Wilderness, Cranberry Lake Wild Forest, Stillwater and a good bit more of the Adirondacks. His stories will take you to there and span the century, 1900 to 2000.