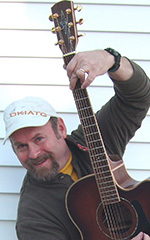 George "Speedy" Arnold is a lifelong resident of Keeseville, New York. He has been drawing and painting most of his life. However, in the last twenty-five years, it is rare to see him without a sketchbook in hand. Almost all of his sketches are done in his spare time between his three "real" jobs: owner and operator of Arnold's Grocery, AuSable Valley school bus driver, and Town of AuSable assessor.

He has illustrated several children's books, including The Little Brook in the Field, authored by North Country musician Jim Goff, and The Adventures of Molly the Monarch Butterfly and Friends, written by Maureen Akey. In 2012, he wrote and illustrated his own children's book, What's an Elephant Doing in the AuSable River?!!.

Speedy is also a musician, performing solo at local farmers' markets, libraries, and schools, and plays the role of Julnissar at Santa's Workshop's annual Yuletide Family Weekends in Wilmington, New York. He has been a member of the bluegrass bands Mardi Gras, The Wolverine Brothers, and Three Doug Knight, and has a number of CDs and YouTube videos as well. Speedy's books, music, and artwork are on display at his business, Arnold's Grocery, on Route 9N in Keeseville, New York.